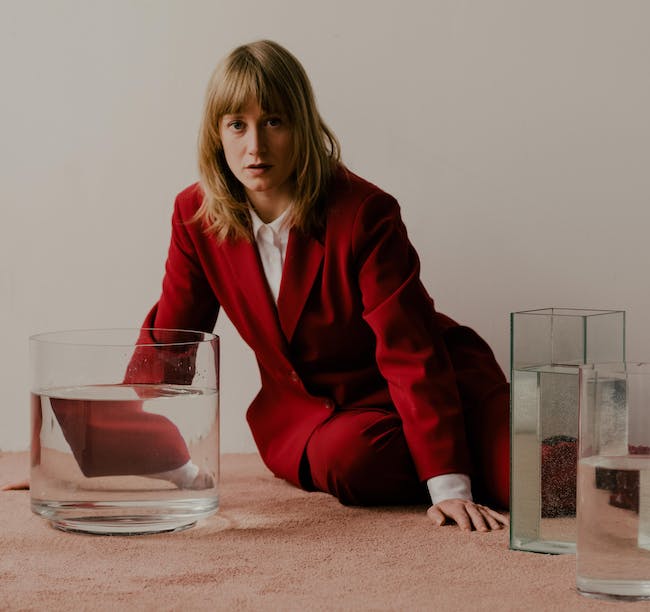 The Weather Station with Cassandra Jenkins

On the cover, Lindeman lays in the woods, wearing a hand made suit covered in mirrors. She was struck by the compulsion to build a mirror suit on tour one summer, assembling it in a hotel room in PEI and at a friend’s place in Halifax. “I used to be an actor, now I’m a performer” she says. In those roles, she points out, she often finds herself to be the subject of projection, reflecting back the ideas and emotions of others. On the album, she sings of trying to wear the world as a kind of ill fitting, torn garment, dangerously cold; “it does not keep me warm / I cannot ever seem to fasten it” and of walking the streets in it, so disguised, so exposed. Photographed by visual artist Jeff Bierk in midday, the cover purposefully calls to mind Renaissance paintings; with rich blacks and deep colour, and an incongruous blue sky glimpsed through the trees.

The title of the album, Ignorance, feels confrontational, calling to mind perhaps wilful ignorance, but Lindeman insists she meant it in a different context. In 1915 Virginia Woolfe wrote: “the future is dark, which is the best thing a future can be, I think.” Written amidst the brutal first world war, the darkness of the future connoted for Woolfe a not knowing, which by definition holds a sliver of hope; the possibility for something, somewhere, to change. In french, the verb ignorer connotes a humble, unashamed not knowing, and it is this ignorance Lindeman refers to here; the blank space at an intersection of hope and despair, a darkness that does not have to be dark.

Emerging out of Toronto’s vibrant folk scene, Lindeman debuted a moody, introspective sound with her independently released East EP in 2008. Her LP The Line followed in 2009, expanding on an earthy, lyrical style, driven by her distinctive fingerpicked guitar and banjo parts. For the next Weather Station release, Lindeman worked with friend and collaborator Daniel Romano, signing with his You’ve Changed Records label to release the critically acclaimed follow-up, All of It Was Mine, in 2011. Though the album was only released in Canada, it gained wider exposure for the Weather Station, leading to several North American tours with acts like Bahamas, Basia Bulat, and Timber Timbre, as well as a tour of Japan. In addition to collaborative guest appearances on releases by Doug Paisley, Siskiyou, and Field Report, Lindeman earned a SOCAN Songwriting Prize nomination in 2013 for a co-write with Steven Lambke of the Constantines. After the release of 2014’s What Am I Going to Do with Everything I Know EP, she signed with North Carolina label Paradise of Bachelors and traveled to Paris to record her third LP, Loyalty. Loyalty (2015) was the first Weather Station album to receive both American and European release, and consequently became somewhat of a critical breakout album. Lindeman followed up in 2017 with an eponymously titled LP that saw an expansion of the Weather Station sound into more rock-oriented territory. Now in 2020, Lindeman leads us into her brilliant and bold new sound, beginning with the release of ‘Robber’ – an electrifying taste of what to expect on Ignorance, due out February 5th.

“Nothing ever really disappears,” Cassandra Jenkins says. “It just changes shape.” Over the past few years, she’s seen relationships altered, travelled three continents, wandered through museums and parks, and recorded free-associative guided tours of her New York haunts. Her observations capture the humanity and nature around her, as well as thought patterns, memories, and attempts to be present while dealing with pain and loss. With a singular voice, Jenkins siphons these ideas into the ambient folk of her new album, An Overview on Phenomenal Nature.

“The whole thing flows like an emotional breakthrough, tying together disparate observations into a serene and unified vision,” said Pitchfork, which gave the album Best New Music. NPR, in their coverage for New Music Friday, called it “so, so stunning.”

Jenkins, a veteran musician who’s played in the bands of Eleanor Friedberger, Craig Finn, Lola Kirke, and rehearsed to tour with Purple Mountains in August 2019 before the tour’s cancellation, spent months meticulously making her debut LP Play Till You Win. For Phenomenal Nature, she arrived at engineer Josh Kaufman’s (The National, The Hold Steady) studio with ideas rather than full songs – nevertheless, they finished the album in a week. Jenkins’ voice floats amid sensuous chamber pop arrangements and raw-edged drums, ferrying us through impressionistic portraits of friends and strangers. Her lyrics unfold magical worlds, introducing you to a cast of characters like a local fisherman, a psychic at a birthday party, and driving instructor of a spiritual bent. In their Rising feature on Jenkins, Pitchfork said: “The idea of decentering the self comes up again and again as a guiding principle... she acts as an ethnographer archiving quotidian sounds and conversations as much as a songwriter telling her own story.”

On album opener “Michelangelo,” before the heavy drum beat and fuzz guitars enter, Jenkins sings quietly “I’m a three-legged dog, working with what I’ve got / and part of me will always be looking for what I lost // there’s a fly around my head, waiting for the day I drop dead.” Phenomenal Nature thrives in this dichotomy between ornate sonics and verbal frankness, a calming guided tour to the edge. Later, on “Crosshairs,” amid lush strings, she sings conversationally: “Empty space is my escape / it runs through me like a river / while time spits in my face.”

“Hard Drive,” the third track and album centerpiece, opens with a voice memo Jenkins recorded at The Met Breuer: a guard muses about Mrinalini Mukherjee’s hybrid textile and sculpture works, which were then on display in a retrospective titled Phenomenal Nature. “When we lose our connection to nature, we lose our spirit, our humanity,” she explains. Stuart Bogie's saxophone & Josh Kaufman's glittering guitar make way for Jenkins' spoken word which constellates scenes from her life, gradually building and blossoming as she recreates a meditation guided by a friend who incants, “One, two, three.”

Sounds of footsteps and bird calls run through the album’s glittering conclusion, “The Ramble.” Meditative and bright, it recalls how Jenkins felt while writing and recording her new material: “Everything else is falling apart, so let’s just enjoy this time,” she said. If Phenomenal Nature has a unifying theme, it’s the power of presence, the joy of walking in a world in constant flux and opening oneself to change.