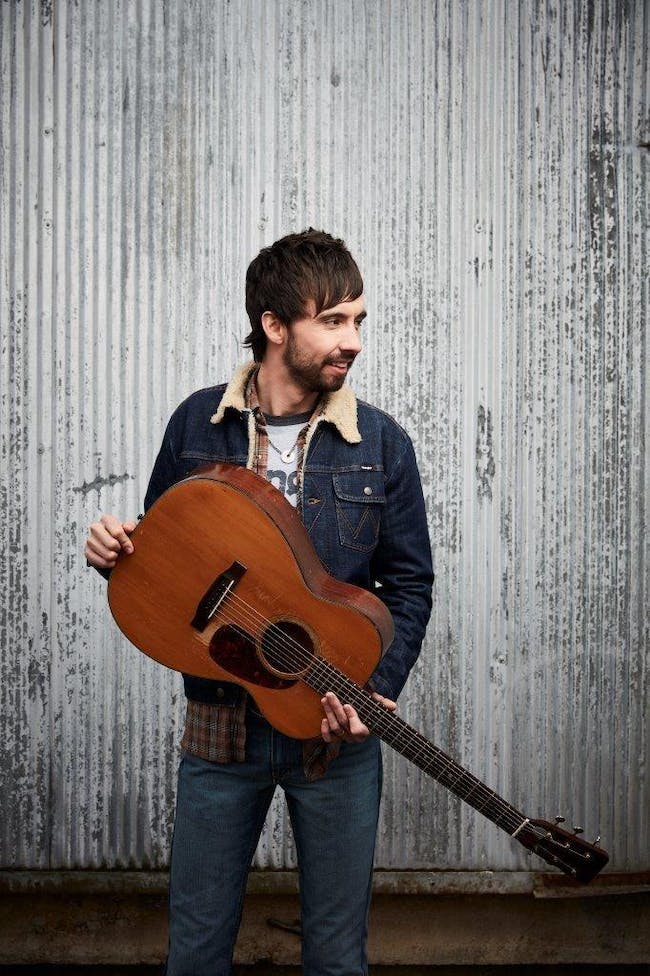 When the time came for Mo Pitney to choose a title track for his new album, there was little doubt as to which song it should be. After years spent both honing his sound and growing his family, Pitney reached something of a turning point: He knew who he was as an artist and a person, and felt it was time to introduce himself in song. The title of new track "Ain't Lookin' Back" summed things up better than anything else could, and Pitney's long-awaited sophomore album was born.

"Since then, I feel like I’ve learned a lot being in the studio," Pitney says. "I almost learned so much it made me partially gun-shy on this second album. When you’re in the middle of making an album, at least my first album, everything was exciting and sounded good to me. I didn’t know what I really wanted and what I didn’t."

In the years following Behind This Guitar's release, Pitney found himself "writing for the sake of writing," as he puts it, following his passion to "write every day" and see what comes of the practice. "I don’t know that I was even thinking much about making my next album," he says. "But when I had about five or six songs that I really started to want to play live, the thought came into my mind, ‘It’s time to make a record.’"

Ain't Lookin' Back began to take fuller shape when Pitney brought on a new producer, his longtime friend and collaborator Jim "Moose" Brown. Moose had played piano on Pitney's very first Nashville recording and, after Pitney had taken several meetings with potential producers, kept coming up as the right person to help helm the project.

"We had breakfast," Pitney shares, "and I said, ‘Moose, I really want to make a record and I’ve just been waiting for the right person. My wife has brought your name up. Your name has come to mind a bunch for me. Would you produce my next project?' He says, ‘You know what, Mo? Let me think about it.’"

At first, Pitney was taken aback by what seemed to be Brown's hesitancy, but soon realized that the producer's diligence was exactly what he needed in a partner in the studio. "Moose listened to the first album and to everything of mine on YouTube, and of course he had played on a bunch of my demos, too, and tried to absorb who I was," Pitney says. "I have never had anyone in town study me musically as much as he did before we went into the studio. He wanted to really understand who I was."

Together, Pitney and Brown began poring over the hundreds of songs Pitney had written over the years, while also listening to outside songs and remaining open to any new ideas Pitney may have in the process. They whittled down the bunch to about 22 tracks before making charts for the band and heading into the studio for three days of recording. After some internal deliberations and conversations with his team at Curb, Pitney chose the 13 tracks that best represented him in this season of his life.

Pitney describes his time making Ain't Lookin' Back as "the most joyful" musical experience he's had thus far. Making the album transported him to a time when he made music for music's sake, and one can hear that joy in the 13 tracks that comprise the new LP. His growth is also evident in the songs' arrangements, which incorporate new sounds like loop pedals and programmed drums, both of which Pitney had feared including in his earlier music, but now feels are important tools in his musical toolbox. “I realized I could use these in a way that still had heart and stay authentic to my style,” shares Pitney.

"Before making my first album, music, for me, was completely made out of desire and love and faith," he says. "I knew I was supposed to make music, so when I sat down to sing, when I felt all three of those things, everything I was doing was really believable to me and the people around me. Moving to Nashville, I adopted making music out of fear. The second the red light went on and there were people around me that had certain expectations of what it was supposed to sound like, it immediately instilled in me this fear that I wasn’t going to live up to that."

You can hear Pitney's joy all across Ain't Lookin' Back, from the opening acoustic guitar notes of "A Music Man" to the final chords of closing track, "Jonas." The rhythmic acoustic guitar and shuffling beat of the title track mimic a train triumphantly leaving the station, as Pitney sings, "I ain't lookin' back, why would I when I ain't going that way?" "Boy Gets the Girl" is sweet and playful, the kind of song that's sure to land on plenty of romantic summer playlists. The wistful "Mattress on the Floor" chronicles Pitney's early days with his wife, channeling the excitement of young love through evocative images like "bedsheet on the window" and "boxed wine on her kiss."

Pitney went on a sonic journey while making Ain't Lookin' Back, but his life outside of the writing room played a big role in shaping his new music, too. He and his wife Emily welcomed their first child, Evelyne, in 2017, and are expecting a second child in July. Being a parent has been integral to Pitney's ability to reconnect with his purest musical passions while also serving as motivation to get out, make new music and have faith that he is walking the right path.

"Two things happened with having a baby," he says. "Everyone talks about how, when a kid comes, you're able to see the world through their eyes again and a leaf falling on the driveway is the most interesting thing in the world. You have the ability to start over and relive that again... But also, it's like, 'Oh my gosh. This little kid depends on me to bring checks home and pay the bills.' That's where the faith has to take over that God has a plan, and He's taking care of my daughter more than I am. I don't think He believes in ruining art for the sake of financial gain."

Ain't Lookin' Back nods decidedly to Pitney's musical roots, which are certainly steeped in country tradition, but find him firmly facing forward. More than that, though, it's a snapshot of a man who found the faith in The One thing that could help him come into his own and share with others what he's learned along the way.